What a weekend…and it’s still only Sunday afternoon! I’m currently holed up in Costa at Liverpool One (the only coffee shop I know of that’s open at 8am on a Sunday morning and freely provides plug sockets for laptops!)

Saturday morning began with a gentle 5km run around Croxteth Park….with my running buddy Adam and 186 other mad people who do that kind of thing for fun. I’m sure there are about a million other, more relaxing things to do on a rare sun-drenched weekend morning….but Park Run Croxteth was actually really good fun. The volunteers and marshalls are a lovely bunch and after receiving a round of applause for being a ‘first-timer’ I limped around in just less than 30 mins…….narrowly beating an 80 year old regular to the finish line. We’re so lucky to have so many beautiful green spaces on our doorstep in Liverpool, Park Run takes full advantage of that. Despite getting horse poop on my beloved neon Nike Lunar glide I will definitely be back next week.

After 30 mins disco nap (looking at social media on my phone…no sleep actually occurred) I got my game face on and headed into the city to meet my partner in crime, Caroline to sample Liverpool Loves, The People’s Festival. We stopped off for a quick Bayou sandwich in the sunshine at top Liverpool eatery Moose Coffee, Dale street…highly recommended! 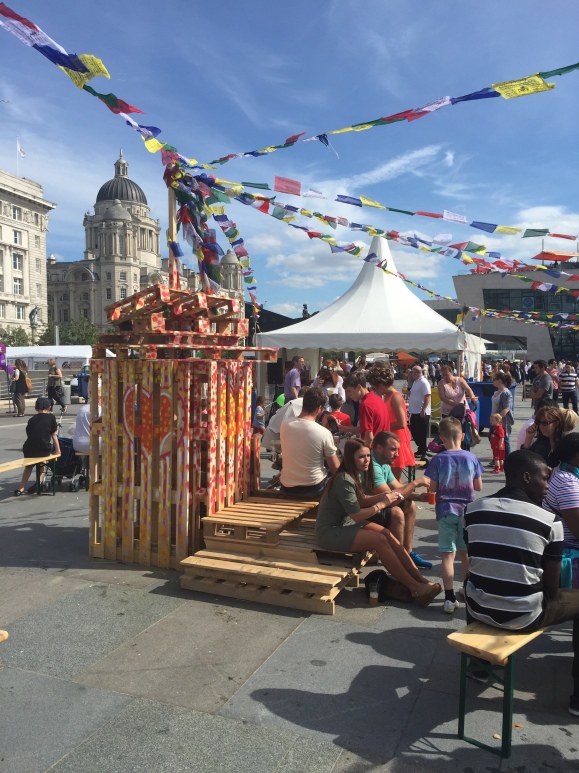 The People’s Festival in a word….Wow! The atmosphere was awesome! A real mix of people and loads of little ones running about and busting moves to the live music. Armed with flutes of prosecco from the Circo bar we made our way through the raving toddlers to chat to local artists OneArt at Capstan’s Bazaar, sampled the most divine chocolate brownies with Ian from Treats bakeshop and overloaded on milk chocolate shells with Bala from The Chocolate Cellar…bit more prosecco…..we signed our LOVE messages with artist, Jay Wheeler….had a slightly tipsy chat with Jo from Water Babies about starting my little ones off swimming (Jo eyeing up my plastic pint of rekorderlig with envy) and finished up having a dance around at the Merseyrail Sound Station before a well earned rest on the hay bails to people watch and soak up the last of the rays. Phew! From my vantage point I watched couples doing tai chi and yoga, kids making elaborate fascinators and origami swans and glammed up hen parties making the most of the scouse hospitality! Talk about a festival for everyone!

Not sure if it was the 5km run earlier in the day but by 7pm I was getting far too comfy on the grass and decided to wobble back up to the city centre and head home. I’m gutted I missed the Rui Da Silva set on the big top stage but I caught highlights on twitter….from the comfort of my own bed! I’ll bet those toddlers were still giving it large long after I got home!

Thank you to Josh and the team at Orb Events, the Liverpool Loves festival was a really engaging, fun event and fully lived up to its tag line ‘Celebrate, Participate, Create’  Cant wait for next year! For more photo’s from The Peoples Festival please check out the inspiration page here.