A wealth of home-grown talent brought the charity event to life with every aspect of the show, from hair and make-up to the designers and models, native to the North West.

The Lord Mayor, Councillor Tony Concepcion and his wife Ann greeted guests and thanked the audience for turning out to support their chosen charities, Ronald McDonald House at Alder Hey, Kind and Listersteps. 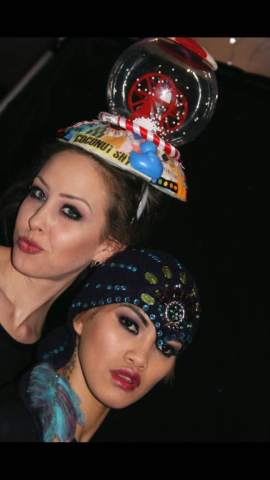 The Lord Mayor gave a passionate speech about the importance of helping local families to cope with difficult situations and how the kind and compassionate people of Liverpool is what makes the city so great.

Singer Sophia Spencer wowed the audience during the interval with her smooth, soulful vocals as guests were given the chance to browse a selection of exhibitor stands selling designer accessories, jewellery and cosmetics.

The second half of the show was dedicated to emerging talent as art students at the City of Liverpool College and Holly Lodge Girls’ College, got their first taste of the Liverpool Fashion scene.

The Mad Hatters of Holly Lodge, who were kindly funded by the Liverpool Decorative and Fine Art Society, were the youngest designers to debut a collection on the professional catwalk, and they did not disappoint.

With just four months to master the tricky skill of hat making, or millinery, the year 12 and 13 students stepped up to the challenge, supported by a fantastic teaching team and created 15 weird and wacky pieces from a Medusa-style snake headdress and top hat to a snow-globe Alice-band and a bejewelled peacock skull cap.

Directed and produced by a winning partnership between Amanda Moss PR and The Lord Mayors Charity Committee, both of which are dedicated to providing opportunities for the city’s young people, the event was a great success with funds raised through ticket sales and raffles on the night.

Lots of photo’s in the Gallery section here. Thank you to Emma Lampkin for allowing me to share her images.